Thrive with Maya Recruitment this Thursday!

New Year, new job? 👔📊
Interested in teaching career opportunities? Come #ThrivewithMaya! Join us this Thursday evening at the YALC for a recruitment event focused on our progressive teaching style, 21st century learning environments and positive approach to alternative/corrections education – all honed daily at the Maya Schools 5 locations. All current and rising teachers and administrators are welcome to attend.

🎯Speak directly with Maya recruiters and current employees
🎓Circulate your résumé and certifications
🧭Learn about the charter education and the hiring process
🌄Learn about our schools, professional development programs and on-boarding process
🚪Engage in informational or one-on-one interviews
🍎Get hired!

This event will connect candidates with hiring managers and encourage attendees to participate in interviews and discuss their career goals within our schools. Free to job seekers – RSVP via email today! 📤 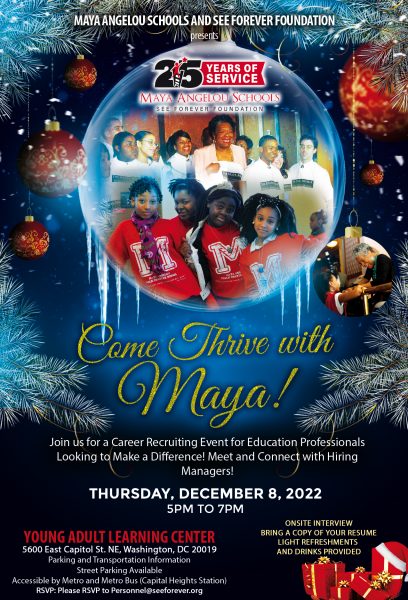 It’s a cold March morning in the nation’s capital. My fingers are stiff, and in the end, useless as I fumble to open the door to David Domenici’s battered 1992 Honda Civic. But with a sturdy shove and then a yank, the wiry 50-year-old reassures me that it’s not me. We’re headed less than a mile away, so Domenici can show me where he used to work.

“It was vile,” he says, nodding to the remnants of a juvenile detention center. Inside, he takes me to a stale, moldering complex where he used to teach the lockup’s student body, kids as young as 13 and as old as 21. In 2009, after allegations of abuse and decrepit conditions, a judge closed the facility. But in a new detention hall just down the road, named New Beginnings, Domenici has managed to build a model school for young inmates. On the day I visit, the classrooms are decorated with colorful murals, encouraging slogans and pictures of grinning recent grads. Teachers and security officers greet the tattooed scholars with warm handshakes and hugs. The ambience is downright optimistic. “You never would have seen anything close to this before,” Domenici says.

The question that remains, will we see others like it? Read full article