There are days that try our patience, our stamina, our resiliency and our resolve.ÃÂ However, amidst the discipline problems, construction noise, and other stress-inducing challenges, our staff and colleagues have persevered.ÃÂ  As our namesake Maya Angelou would say, Ã¢â¬ÅTry to be the rainbow in someoneÃ¢â¬â ¢s cloud,Ã¢â¬Â and the teachers and staff of Maya Angelou Schools do so every day. It is not an easy job, but together, we can be a mighty force of change.ÃÂ  We can change the lives of the students we seek to serve.

Just a few weeks ago, the high school staff moved to the upper-level floors of the newly renovated Maya Angelou Learning Center. These sun-drenched classrooms will serve as the home base for our wonderful team of teachers and administrators. There is no doubt that the construction has been a period of endurance for us all, but we anticipate great transformations this year.

Even amid the renovation and transitions, Maya students continue to surprise and behold me. In this issue of See Forever, read about Omar Mobley, one of the four Young Adult Learning Center graduates who was chosen to intern with Forrester Construction on our renovation project. Also included in the newsletter is the essay of Shakira Hawkins, a senior at the high school who won a prestigious opportunity to study at Emory University in Atlanta, Georgia through OSSEÃ¢â¬â ¢s Summer Scholar program. And finally, our scholars at the Academy competed at yet another spectacular Speech Competition with incredibly moving and impassioned deliverances on the topic of power. You can read the top two speeches here.

We hope to make this a year of transformation and collaboration, not only with our partners, but also with our supporters and parents. Please come by and see the new space we will call home, meet our administration and teachers and experience the Maya Way.

We wish you a wonderful holiday season and look forward to celebrating the last month of 2014 with you!

The Young Adult Learning Center is proud to officially unveil our full-day integrated programâYALC Complete! As the name suggests, this is an opportunity for students to take full advantage of the full spectrum of programming offered at the Young Adult Learning Center. YALC Complete participants are on site from 9am- 3:30pm Monday through Friday (which includes one thirty minute break midday complete with a delicious lunch).

These motivated students are enrolled in two sets of classes: Academic courses geared towards critical thinking and success on the GED exam as well as a career and technical program focused on either (1) attaining a pre-apprenticeship certification in facilities maintenance or (2) various industry standard certifications in information technology, including the full Microsoft Office Suite. Teachers from the core- academic program and the workforce credential programs engage in collaborative planning to ensure instruction is contextualized and highly relevant.

In addition to the course work associated with the program, students have access to the robust wrap-around services offered at the YALC including career preparation, post-secondary readiness and counseling/ supportive services and groups. They engage in a student-led SMART goal setting and maintenance process through their tenure in the program. When these young people graduate the program, they are educated, skilled and completely ready for success! 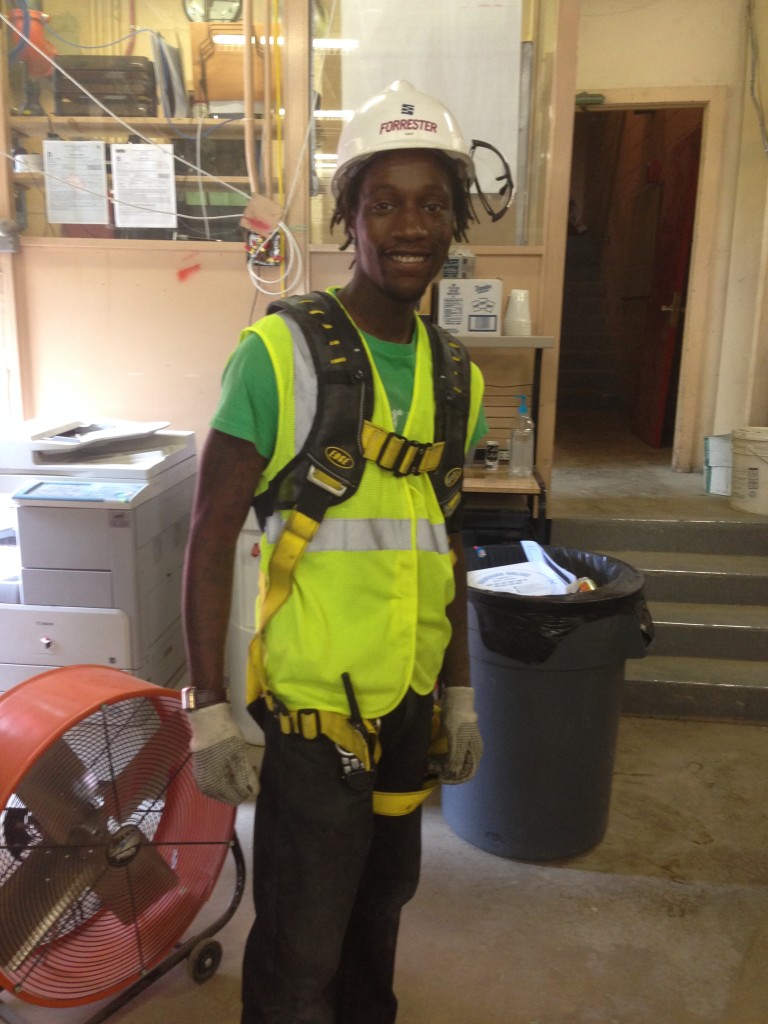 Prior to enrolling at the Young Adult Learning Center, Omar had been in and out of multiple programs and schools. “Back then, I was stubborn and selfish. None of my teachers were hard enough on me because they didn’t expect much,” Omar remembers.

Omar began his journey to true success after starting at the YALC in September of 2013 where he quickly became an instant presence on campus. His gregarious personality would take him to various classrooms and offices from one minute to the next. Staff at the YALC would joke about Omar sightings as it was impossible not to know when Omar was in the building. Â However, he soon started buckling down and getting serious about his work.

“When I came to the YALC, the teachers and counselors set high standards. Â They didn’t let me get away with the same stuff I was doing before.”

At the end of December last year, Omar passed the math section of his GED, the last section left to complete his credentials. He refers to the pass as the best Christmas present he has ever received.

Omar’s journey did not stop after obtaining his GED. Â After graduating, he enrolled part-time at Westwood College to pursue an associate’s degree in Physical Science. Even though the first few months of his job search proved futile, he stayed in touch with his teachers and counselors at the YALC and assured everyone that if he could just have a job opportunity somewhere, he would prove himself as reliable and hard working. He was ready to make a better future for himself and his three-year old daughter.

This past summer, the YALC had the opportunity to refer several students to Forrester Construction for their internship program and Omar’s name made the list. He jumped on the opportunity. Â He showed up early every day and worked tirelessly without fail. When his internship ended in August, Forrester decided to keep him on and give him additional responsibilities. Working like this is the best feeling ever,Â Omar reports. “I can make plans for what I want to do every week now. Â I’m also able to raise my beautiful daughter. She’s perfect and I don’t want anyone else raising her. I want her to have all of the things I didn’t.”

He is now working with Forrester on Phase II of the Maya Angelou Learning Center renovations while continuing his studies at Westwood College. Next time you come to campus, keep an eye (or perhaps an ear) out for Omar, as you will see a proud and driven man hard at work.

Please join us in congratulating the Young Adult Learning CenterÃ¢â¬â ¢s first 2014 GED graduate, Chanaya Wheeler!ÃÂ  Ms. Wheeler came to the YALC in April of 2014 reporting that she had way too many credits to make up in her traditional high school and wanted to try the GED route instead.

The new GED is a very rigorous test with an emphasis on critical thinking, but Ms. Wheeler was able to gain the skills she needed to be successful and even helped tutor her classmates along the way. Ms. Wheeler started taking sections of the test early this fall after she turned 18. Last week, she passed the final section of the exam making her our very first graduate of the year.

She is enrolling at the University of the District of Columbia (UDC) for an associateÃ¢â¬â ¢s degree in business and technology and plans to go on to earn a bachelorÃ¢â¬â ¢s degree in accounting.ÃÂ  We know her journey will be filled with continued success.

Thanks to the generous support of our Capital Campaign donors, we were able to move our Young Adult Learning Center into a beautifully renovated space last November. The new YALC includes a student lounge and library, a fully-featured computer lab, and a large space for our building-trades program run in cooperation with the Home Builders Institute. New windows on the west elevation bring natural light into the space, greatly improving the learning environment for teachers and students alike. We began Phase Two of our major renovation in April and are now several months into the process of transforming our High School space into a state-of-the-art learning facility. The new space will include upgraded network infrastructure, bright, new finishes, an expanded healthcare suite, and more space for individualized instruction and wrap-around services. Over the summer, the construction team will also be building two new science labs for the chemistry and biology classes.

When the project is completed this fall, the Maya Angelou Schools will benefit from a revitalized building ready to serve our families and the neighborhood for decades to come. Everything from computer networks and intercoms to parking and windows will be improved.

We are grateful to our supporters, partners, staff, students, and families for making this project possible. The entire organization is looking forward to spending the 2014-15 school year and beyond in a facility that was truly built for and supports the Maya Way. – Chris Tessone, Chief Operating Officer, See Forever Foundation

The YALC has been working hard all year to prepare for the accreditation visit. Â The process started with a self-study that dove into 12 different areas of school-functioning, including sections on mission and vision, governance and leadership, educational program, student services, facilities, finance, amongst others.

In order to get information for the self-study, students and staff filled out surveys that gave them the ability to express their thoughts on what was going well and what still needed improvement. The 250-page self-study document summarized the surveys and evidence gathered to give the YALC staff a good critical look at its programs and operations.

During the four day visit, the Middle States team documented, in a glowing report, that the YALC met the accreditation standards in all 12 areas! The YALC team is excited to move forward with the action plan that was created during the accreditation process, a plan that will focus on making the YALC even better for its students.